Technicolor Skull: The Music of War 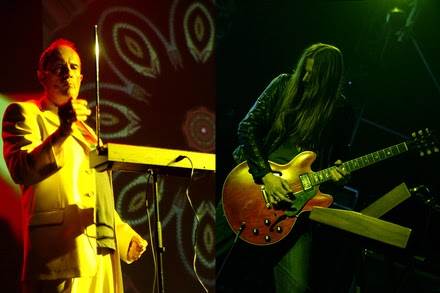 Technicolor Skull is Kenneth Anger’s current collaboration with the musician, film-maker and magician, Brian Butler. They perform as a duo against a video backdrop of clips taken from Anger’s oeuvre remixed with images of skulls abstract iconography. Butler plays discordant guitar noise whilst Anger busies himself with a Theremin. Most performances to date have taken place in gallery-type contexts, in support of exhibitions by Butler and / or Anger and they have also just put out a record. The particularity of this context and the nature of their output thus far sums up the nature of Technicolor Skull as a project: an ongoing series of improvised ‘magickal’ performances that carry the resonance and aura of a rock band. 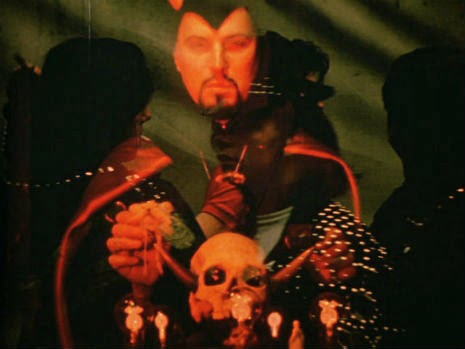 Musically, Technicolor Skull owes much to the sound of Mick Jagger’s distress signal motif that adorns Invocation of My Demon Brother (1969). In fact, a significant sample of that piece appears in their track ‘Invokation’. The idea of the invocation as a magickal process – that which draws energies in – works as an index of the group’s apparent modus operandi. Essentially, Technicolor Skull seems to serve two purposes: it offers an outlet for Anger to recycle his Magick Lantern films outside of the standard screening / festival context and it also creates a bridge between the work of Anger and Butler, a connection that implicitly positions the latter as something akin to an heir apparent. More skeptically, given Anger’s previous association with Bobby Beausoleil, one could argue that playing with Butler allows the 87 year old Anger to stay young (and relevant). Maybe their stage invocation works to absorb the energy and vitalism of the crowd? Certainly, there’s an overt utilization of Anger’s iconicity at work here. If Butler is a surrogate Beausoleil, he’s the figure that Anger could have done with in the mid to late 1960s; a Luciferean character with the right combination of esoteric interests and business savvy that permits such left-field pursuits as magickal cinema to be efficiently monetized.

Taken as a performance, Technicolor Skull veers away from Anger’s signature material. The visuals are of course consistent but the noise register is somewhat at odds with his pioneering juxtaposition of image and either classical music or classic rock n roll (best exemplified in Scorpio Rising (1963)). The sound, image and mood of Technicolor Skull is actually a lot closer to the kind of material produced by bands who have appropriated Anger’s aesthetic, such as Death in Vegas and Primal Scream. It is as if, in recapitulating his earlier work in the company of Butler, Anger is consolidating his currency in contemporary music culture: a movement of habituation which is the reverse of the trajectory towards margins and extremes that previously characterised his work. 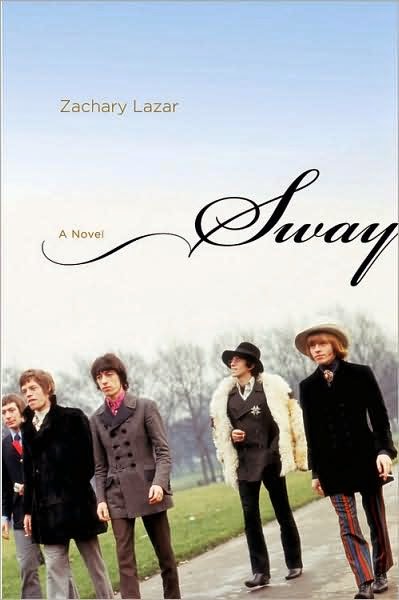 Aside from this simulacral element the abrasive quality of the group (redolent of other noise acts like Skullflower) is relevant as regards its practical element. That’s to say the sonic ferocity of Technicolor Skull points to the close intersection that exists between magick and noise, a link that is arguably integral to Anger’s wider praxis. This was recently highlighted in Zachary Lazar’s novel Sway (2008), a (loosely) fictionalized account of the biographical intersections between Anger, Manson and The Rolling Stones. Lazar populates the novel with a series of fictitious texts that hold the various nuclei together, one of which is the magickal tome The Sephiroth. In this we are told ‘Anger’ reads of the archetypal alignment that connects individuals with their mythical doubles. The realization of this selfhood is offered as the object of the magickal work (an essentially Thelemic concept) and requires the initiate to access a conceptual space in which opposites are negated:

Male and female, self and other, reality and dream. At the meeting point of these opposites was a zone of energy and pain where the spirit of Lucifer burned in isolation. It was the wild chaos of orgasm, the music of war, the entranced stupor of hallucination. Only a few could perceive this zone. To penetrate it was to negate any difference between good and evil, life and death, desire and fear.

Lazar is essentially describing the thinking that is assumed to have informed Invocation. As Deborah Allison has described, the film refers to a “ritualised process of self-development” in which the ‘demon brother’ of the title is indicative of the “higher part of oneself that one must access in order to understand one’s true will”. That Lazar connects this self-actualization to such dissolving and affective sonic phenomena as “the music of war” indicates that extreme noise operates as a potential vehicle for the achievement of the subject position outlined in The Sephiroth.

A certain precedent for this method exists within the broad history of mysticism insofar as the experience of sensory extremes (involving either sensory extremes or amplification) have frequently been tied to the achievement of spiritual elevation. Negating one’s sense of self either by opening the mind to a much wider flow of information or by reducing such activity to a kind of flat-line level seems to be culturally privileged as a method of dialectically producing the zonal existence Lazar alludes to. Hence, the close oscillation between noise and silence as seen in texts like Jack Kerouac’s Big Sur (1962) and William Burroughs’ The Ticket That Exploded (1962-67). 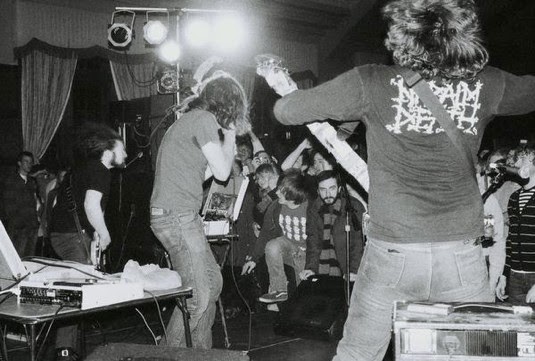 Noise musicians such as Wolf Eyes and Aaron Dilloway also seem to work in this direction. Particularly when seen live, their performances deviate from the cathartic communality of the standard rock gig. There’s no carnivalesque purging of one’s own energy but a bludgeoning, zombifying negation of the audience into a state of mass. Similarly, Dilloway’s performances, like those of Prurient move towards the corporeal affectivity of Artaud’s embodied theatre: a shift into a violent state of glossolalia that departs from the notion of a ‘performance’ in the sense of a rendition of presentation.

It is this logic that I see at work in Technicolor Skull. Whilst within the ‘canon’, so to speak of noise
music, Anger and Butler add little to the sonic fabric of the discourse, their approach is indicative of the manner in which Anger channels his work into media that is in synchronicity with his esoteric paradigm. Whereas Invocation communicated the chaos of war and conveyed a certain violence in its cutting style, the emphasis of Technicolor Skull is upon the manifestation of a similar affectivity via the creation of a primarily sonic discord. The sound matches the images projected but at the same time, the ‘event’ of the performance appears to work towards the manifestation of a charged and elevated instant. It is of course debatable as to the extent to which this transport is achieved. However the point is, Anger and Butler use the creation of noise as a supplement (in the sense of a parallel and a replacement) to their more overtly theatrical rituals (such as Butler’s Babalon Working). It is an approach that parallels and to some extent clarifies the elision between drone and ritual in the work of Sunn O))).

In one sense Anger is an artist who has constantly sought to reinvent himself through the proximity of his collaborators. However, he is someone whose practice has also remained remarkably consistent despite its change in contexts. If protean, the fluidity of his output is indicative of the manner in which the ideas he deals with are present in the undertow of a variety of different languages.
Posted by James Riley at 14:08 No comments: