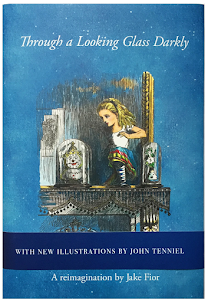 Some notes on Jake Fior’s new novel, Through a Looking Glass Darkly (2020).

In 2011 rare book dealer Jake Fior made a startling discovery. He came across a large wooden chessboard, dulled with age and decorated with sixteen ink and watercolour images. Carrying the monogram ‘JT’ the illustrations depicted scenes from nursery rhymes and fairy tales, talking chess pieces and strange young girls holding crowns aloft. At first Fior thought the board was an interesting Victorian novelty piece; the images were familiar, but he couldn’t quite place them. It was only when he compared the them to Sir John Tenniel’s illustrations in Lewis Carroll’s Through the Looking Glass and What Alice Found There (1871) that the board’s significance started to become clear. Not only were the pictures stylistically identical, they also carried the same monogram.

Realizing he might have discovered something rather special, Fior sent the board for forensic pigment analysis and got busy with research into the work of Tenniel, Carroll and their milieu. Both investigations yielded the results he was hoping for: not only did John Tenniel design the chessboard but what Fior had in his possession was in fact Tenniel’s own hand-painted creation. Tenniel, the designer of Happy Families, seemed to have produced the board as a piece of prototypical Carrollian merchandise soon after the publication of Through the Looking Glass – a novel in which chess has a significant role. Fior had not located a much sought after ‘holy grail’ of Carroll collectors, but an even greater rarity: a one-off; an artefact that no-one even knew existed despite its proximity to the now iconic novel.

These kinds of archaeological discoveries invariably have an impact upon accepted history. Origin stories have to be reassessed and the standard narrative has to be adjusted to accommodate the new element. In the case of Carroll’s novel, the impact of Tenniel’s resurrected chessboard, is similar to the effect of the novel’s central motif, the looking glass. Mirrors reflect and they also distort. They offer a glimpse of the self but also open a portal into the world of the double, the doppelganger and the daimon. This is the nature of the relationship between Alice’s Adventures in Wonderland (1865) and Through the Looking Glass. Carroll intended for the latter to act as a continuation of and a reversal of the former. Across the two novels Carroll moves from summer to winter, from vertical images to horizontal, from cards to chess. Tenniel’s chessboard occupies a similar position in relation to the second novel. It points to the possibility of a parallel means of engagement with the text, one that is tactile as well as visual. It suggests that at one point in its history, Through the Looking Glass was intended not just as a book that could be read, but also a game that could be played.

Fior’s latest project continues with this mirror-logic. He has produced a contemporary version of Through the Looking Glass by re-writing Carroll’s original as a darker, more esoteric narrative. If Through the Looking Glass is Carroll’s mirror image of Wonderland, then Fior’s new novel, Through a Looking Glass Darkly (2020), is the mirror crack’d. In this text Alice is not the Victorian schoolgirl but a modern, streetwise incarnation, and the book’s illustrations - previously unseen Tenniel images - teasingly channel the character’s 1960s role as a psychedelic totem. Crucially, the titular looking glass of Fior’s novel is not a domestic living room mirror sat atop a mantelpiece, but a sorcerous magic mirror salvaged from a junk shop.

This re-imagining is complemented through the use of references to actual historical events including W.B. Yeats’ association with the Hermetic Order of the Golden Dawn. Fior presents the occulture of the late nineteenth century as a blend of mysticism, conspiracy and artistic experimentation to provide Carroll’s existing references to numerology and mathematics with a texture of ritualistic significance. Carroll saw the chess structure of Through the Looking Glass as a formal exercise and a method of narrative organization. Re-contextualised in Fior’s specialized range of citations, this system becomes indicative of a much wider structure of allusion. His Alice doesn’t move through a landscape of play and nonsense but an occult landscape of secrecy and accumulative paranoia.

Through a Looking Glass Darkly stands as part of the recent trend for literary re-engagement that has seen Joanna Trollope’s Austen pastiche and the continuation of the James Bond franchise by Sebastian Faulks and William Boyd satisfy a contemporaneous desire to revisit classic works. The Carrollian oeuvre is no stranger to this revivalism. The enduring popularity of the Alice novels is, in part, due to the extent to which they have been variously reinterpreted by writers and artists ranging from Alan Moore to Marilyn Manson. These variants usually combine a recapitulation of the basic narrative trajectory with a speculative reading of the Lewis Carroll / Alice Liddell relationship. As such, what often emerges is an uneasy mixture of authorial criticism and textual reverence. In contrast, Fior’s take on Carroll exhibits no such respect. It attempts to develop key characters and plot lines on the basis that the original novel is deeply flawed. The result then is a version of Through the Looking Glass that is something of a remix; an appropriation of the original’s most resonant features that seeks to forge a new narrative out of the old.

The comparison here to sampling is not intended as just a lazy musical analogy. Music is a creative act that’s as important to Fior as mathematics and chess were to Carroll. In the early noughties, he was instrumental in developing London’s guerrilla gig scene. After witnessing the intensity of hundreds of fans in a one-bedroom flat in Chelsea, Fior is aware of music’s enchanting power but, equally, he knows how readily an audience can also transform the music they hear. “The best songs,” he says, “are entirely ambiguous in meaning and therefore people can form connections to them in ways that are entirely different to the writer’s intention, but still no less valid.” In this sense, it is the misheard lyric, the listener’s half-remembered and thus re-imagined version of the song that often works as “a big improvement on the original.” Through a Looking Glass Darkly is Fior’s intentionally mistaken and re-cycled version of Carroll’s extremely familiar tune.

Fior is well placed to defend his detournement of Carroll against the inevitable criticisms of Alice purists. His explicit intention is to shock and offend such literary conservatism. In essence, this aspect of Fior’s project is a continuation of postmodern self-consciousness and motivated intertextuality. Although somewhat unwieldy, a more specific adjective to describe the project would be catoptromantic. Catoptromancy is the use of a mirror for the purposes of divination. As a magical technique it’s closely connected to scrying and it works on the basis that the mirror is a mediating device, one that communicates and shows something in excess of the user’s own reflection. The catoptromantic viewer does not see actuality but possibility; not that which is, but that which might be. Similarly, in re-writing Carroll, Fior is not preserving the essence of the novel through an act of reproduction. Instead he’s attempting to conjure the text that’s hidden somewhere in the margins of the original; the dark and mesmeric novel that Through the Looking Glass could have been.