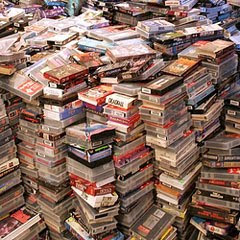 I regularly lament the commercial decline of VHS. The second hand market is of course still buoyant but the dominance of DVD over the last decade and now the shift to greater 'fidelity' offered by Blu-ray is officially presenting the format as obsolete. A recent release of of film in as a limited edition VHS tape was heralded as 'retro'. DVDs are difficult, slippery and unreliable. They're like little open wounds. One nick and the whole thing's messed up. Watching Southland Tales the other night (ok, ok, I wanted to see Hollywood tackle quantum entanglement, alright?). In the spirit of its status as a creative and conceptual disaster the ex-rental disc kept skipping, pausing and crashing, thus rendering The Rock's finest performance since Doom unwatchable. Of course, its old news to criticize a format but I thought it was worth pointing out that I once bought The Church (aka Demons 3) on video. The whole top part of the cassette covering the tape was missing and the tape itself was creased and scrunched up. I bought the video anyway because it was rare and was going literally for pennies. It played fine, just a bit of distortion when we got to the creased part. No skipping, no nothing and my top-loading VCR didn't suddenly refuse to work.
This is the thing: VHS is the king of formats. Period.
Posted by James Riley at 05:07 No comments: