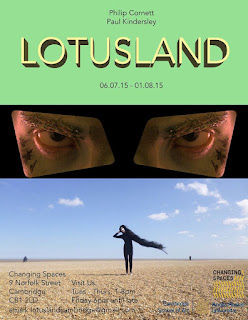 Last week I took part in the final night of the Lotusland residency at Changing Spaces, following the kind invitation of Jo Brook.

Lotusland is an open studio residency devised by artists Philip Cornett and Paul Kindersley. Billed as "a space to nurture a utopian yearning of a queerness that is not yet here", Lotusland channels the aesthetics of Jack Smith into a series of vibrant and subversive works across a variety of media.

Bad Timing installed Self-Assembly, their mobile 'possible space' that functions as a venue-within-a-venue whenever and wherever it manifests. Projected inside Self-Assembly on this occasion was my video about William Burroughs, Territories (2015).

Territories was designed as an installation piece to tie in with the themes of the evening. I was ably assisted in the making of the video by Evie Salmon who provided the brilliant narration. On the night, the programme notes used the following outline:

Combining images and field recordings from ,  and , Territories moves through some of the many places William Burroughs lived during his long career. Of particular interest are the sites which carried a magickal significance for for him. Although somewhat nomadic, Burroughs was able to situate himself very specifically into each space he encountered. Sometimes this involved the performance of 'operations' in a given area. These exercises and Burroughs's life of travel may help us question what is meant by 'home'.

Scroll down for a series of images from the show. 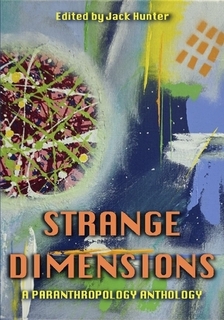 Jack Hunter, esteemed editor of Paranthropology has just published Strange Dimensions. This anthology features some of the best writing to have appeared in the journal to date. I'm happy to say that 'Playback Hex', my essay on Burroughs, magick and the Moka Bar has been included as part of the selection.

Paranthropology is a brilliant journal that explores paranormality from a productive interdisciplinary perspective. Its very much in line with the ideas an aims of Exploring the Extraordinary, English Heretic and The Alchemical Landscape. All the issues published thus far are online. Together they make a fantastic resource for anyone interested in paranormality and occulture.

It is from the paranormal’s multifaceted nature that the title of this book takes its meaning. Throughout its pages we encounter, time and again, talk of a wide variety of dimensions, levels and layers, from social, cultural, psychological and physiological dimensions, to spiritual, mythic, narrative, symbolic and experiential dimensions, and onwards to other worlds, planes of existence and realms of consciousness. The paranormal is, by its very nature, multidimensional.

Jeffrey J. Kripal, (author of Authors of the Impossible: The Paranormal and the Sacred) adds this:

Once again, Jack Hunter takes us down the proverbial rabbit hole, here with the grace, nuance and sheer intelligence of a gifted team of essayists, each working in her or his own way toward new theories of history, consciousness, spirit, the imagination, the parapsychological, and the psychedelic. Another clear sign that there is high hope in high strangeness, and that we are entering a new era of thinking about religion, about mind, about us.

You can order a copy of the book here. Thanks and congratulations to Jack for putting this project together.

Postcard from the Pentagon

A recent flea-market turned up this lovely postcard of the Pentagon. Printed and distributed by L.B. Prince Lithograph Company of Fairfax, Virginia, the description on the back reads:

A city in itself, the Pentagon at one time during World War II reached a peak strength of nearly 35,000 employees. Its huge Concourse is operated principally as a shopping centre, including everything from a flower shop to a Washington department store. This huge building is in Arlington, Virginia.

The card was sent to England from Washington in April 1971 and contained the following note:
Have arrived in Washington. We landed about 4.30 on the same day. Weather very cold but dry: 19 degrees. I forgot my tapes. Please will you send them, especially the one in the white box. I went to work today. The company has got the contract on the atomic power station.
Handwritten texts about atomic contracts are hard to ignore. That said, I find myself giving more thought to those tapes. What was on the tape in the white box?

It turns out that this particular printing - postcard 'PE-91' - has a certain amount of resonance within the conspiratorial aether, the field of Discordianism to be precise. In 1964, Kerry Thornley (aka Omar) sent the card to Greg Hill (aka Malaclypse the Younger). According to Adam Gorightly who discusses the correspondence in A Postcard from the Five Sided Temple, Thornley had "toyed with the idea of taking out a post office box at the Pentagon (if that’s even possible) and making it the official address of the Discordian Society headquarters."