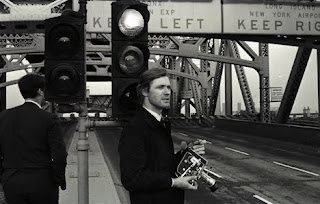 Towards the end of Paul Cronin’s In The Beginning Was the Image: Conversations with Peter Whitehead (2006), we follow the subject into his archive. One room is filled with film canisters. This is the assembled ‘past’ of Peter Whitehead, the radical film-maker who recorded and to some extent critiqued the Sixties counterculture in a series of explosive documentaries ranging from Wholly Communion in 1966 to The Fall in 1969. Following this, we move into a second room. Having seen the archived ‘image’, we are shown a space filled from floor to ceiling with the ‘word’. Whitehead moves through boxes containing texts, books and papers, manuscripts of novels published and unpublished. We see the cumulative production of someone who has ‘written everyday’; an enormous array of notebooks and diaries kept obsessively since childhood.

Earlier in the film, Whitehead states that he resents ‘the privilege of the word’ and emphasizes a preference for visual expression. The act of ‘painting a picture, taking a photograph or making a film’ is for Whitehead a means of gaining access to ‘what we perceive, what we dream and what we imagine’. Language, communication via the agency of the word, he argues is, ‘by definition, alienating’. It is associated with reason, rationality and scientific measurement, which Whitehead regards as the ‘deliberate breaking up of experience that was beforehand total’. The striking scene within the archive adds a slight twist to this apparently strict philosophical split. Whitehead comments that ‘the conflict between the image and the word’ has been a central issue within his life and work. However, as the evidence of a prolific textual output indicates, it is not so much the written word that Whitehead takes issue with as the notion of language as a block to natural ‘feeling and intuition’.

As Whitehead begins to discuss his lifetime fascination with ancient Egypt, particularly the hieroglyphic, his project becomes clear. Whitehead’s work, whether communicated as films, novels or explored through his experiences as a falconer, reaches towards a pre-verbal state, the word as image, translucent and transparent. Moving away from the sex, drugs and rock ’n’ roll mythology of the Sixties that has often circulated around Whitehead, Cronin’s fascinating documentary portrait posits this as its central concern and conceptual basis.

The film was assembled to accompany ‘In the Beginning Was the Image: The Films of Peter Whitehead’, a comprehensive retrospective which played to extremely positive reviews all over the world throughout 2007. The documentary incorporates interviews conducted in 2006 with clips from Whitehead’s films and numerous television appearances. In addition, Cronin draws on many previously unseen photographs from all stages of Whitehead’s career. Speaking to me in a recent interview, he explained that his intention was not ‘to challenge the documentary form’ but to make a film that could ‘represent Peter at the Film Festivals he’s unable to travel to.’ When discussing his use of material supplied by Whitehead, Cronin speaks of working out of ‘respect for Peter’. He allows him ‘to talk, to tell his stories with sufficient images behind’. Whitehead’s work, whether communicated as films, novels or explored through his experiences as a falconer, reaches towards a pre-verbal state, the word as image, translucent and transparent

Here we have film as presence, archive as evidence. Although Cronin makes use of much editorial intervention to construct his film, this intention mirrors Stella Bruzzi’s description of ‘orthodox’ documentary in which there is little distinction between the ‘real’ and ‘representation’. As Cronin explains, ‘every frame’ is about Whitehead, it is ‘a first person account’. This description obviously does not deny the possibility of additional ‘versions’ of the stories told. The implication, however, is that the archive material is used to ‘verify’ rather than to challenge or question Whitehead’s statements. As we see, Whitehead’s reference to his time in the army spent ‘buying and selling MG sports cars’ forms a voice over to a short montage of photographs from this period. Similarly, photographs from the nine months he worked as a news cameraman for Italian television are edited into interview footage from the late Sixties, again, serving to verify for the audience the account given to the interviewer. 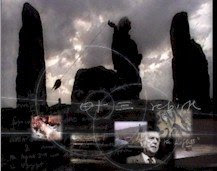 This approach is markedly different from that adopted by Iain Sinclair and Chris Petit in their exploration of Whitehead, The Falconer (1997). Working from the perspective of the Burroughsian maxim that ‘nothing is true, everything is permitted’, Sinclair and Petit drive a significant wedge between reality and representation. Interview footage and material similar to that which Cronin draws upon is subject to extensive digital manipulation and radical superimposition. It is also intercut with the perspectives of the film’s additional participants, particularly Petit and researcher Francoise Lacroix. The result is a hyperreal mix in which Whitehead disappears into an essayistic examination of the inability to capture objective ‘truth’. Judging from the film’s opening focus on Whitehead’s surgical scars following his 1996 heart attack and bypass operation, the predominant narrative metaphor in The Falconer appears to be that of a dissection. Sinclair and Petit’s ‘documentary investigation’ of Whitehead proceeds by continually breaking down images and cutting up threads of information. It is an exercise in Sinclair’s view of history as a mutable flux, a data bank to be continually re-assembled.

Having said this, it’s a false distinction to claim that Cronin’s film maintains a greater degree of objectivity than The Falconer on account of its apparent lack of overt manipulation. Although there is little attempt to use editing to distort Whitehead’s interview responses, and the flow of the film is largely dictated by the content of Whitehead’s recall, Cronin has assembled his material into an engrossing narrative structure. At the outset of the film we see Whitehead making pottery, a craft he took up soon after his heart attack. Cronin filmed this process from the initial shaping of clay to the eventual firing of the glazed pots in the kiln. The resultant sequence is extended across the entire film. The two halves of the film, like the two sides of the brain, are inseparable. Despite their change in tone and style, the enacted shift works both to elaborate and challenge established images of Peter Whitehead 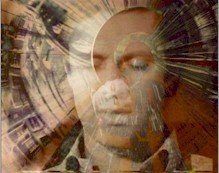 If the key motif of The Falconer is that of dissection, these slowly developing images suggest that In the Beginning Was the Image is structured around a process of gradual layering. A portrait of Whitehead unfolds in parallel with the moulding, decoration and glazing of the pottery. This sequence also puts into play a motivating active question for the audience. The visual creation of the pottery points to a wider development beyond a chronological charting of Whitehead’s film career. As his account comes to the end of the Sixties and a decision to give up film following The Fall, the audience is aware that the pottery sequence is only half complete. The footage works as a visual signpost signalling that there is more to be revealed and that the idea of Whitehead as film-maker is perhaps merely a prologue to a much more interesting section of the story.

After abandoning film, Whitehead became a falconer, trapping and breeding birds all over the world, eventually setting up the Al Faisal Falcon Centre in Saudi Arabia. Cronin covers this period by drawing upon film and camcorder footage of Whitehead’s work in the desert. It is the inclusion of this material which pushes the film to its three hours-plus running time. In order to provide the audience with an interval, Cronin splits the documentary into two parts. This division also reflects Whitehead’s own personal transition. As Cronin explains, part one is ‘a roller coaster ride’, presenting everything usually expected of the Sixties. Part two then works to ‘consolidate’ and ‘explain’ these images, bringing to light material the audience ‘could never conceive of’.

This second section focuses upon Whitehead’s childhood in Carnforth. This period is seen as a prelapsarian experience of ‘ecstasy’ and ‘paradise’ shattered according to his own account by a move to London and the death of his father. Whitehead states that ‘the way he got back to it all’ was through ‘the falcon’. This description is recounted over stunning images of Whitehead in a jeep pursuing a falcon deep into the desert, seemingly into the sun itself. Other sequences show him acquiring eggs and his extraordinary training methods which seem to involve a transformation into the falcons he is attempting to breed. Apart from their content, what is notable about these sequences is Cronin’s gradual reduction of cuts to the interview footage and the use of voice over. In part, Cronin as a film-maker follows the advice of Alexander MacKendrick (whose influential teaching notes he recently edited) by communicating ‘as much as possible with as little words as possible, using only images to tell the story’.

At another level, this technique also engages with Whitehead’s outlined conflict. The idea of the image dominates the second half of the film, gradually reducing an emphasis on Whitehead’s speaking voice as if enacting his desired return to the pre-verbal. Whereas Cronin previously used Whitehead’s archives to authenticate statements, in these later sequences the material is used on account of its resonance, its ability to suggest that aspects of Whitehead’s life move beyond conventional means of explanation and description.

Cronin reports that some early comments on the film recommended cuts to the second section. Occasional festivals also requested a screening of only the first part. I agree with Cronin when he emphatically states that this is ‘missing the point’. The two halves of the film, like the two sides of the brain, are inseparable. Despite their change in tone and style, the enacted shift works both to elaborate and challenge established images of Peter Whitehead. The audience is provided with an extremely rich and detailed portrait of an extraordinary figure, yet there is sufficient ambiguity generated for Whitehead to remain fascinating and enigmatic, despite his own concern that he has ‘said too much’.

Originally published in Vertigo 3.5 Spring 2007
Posted by James Riley at 12:44 No comments:

From a 2006 interview with Skaters (Spencer Clark and James Ferraro)

"I don't want recordings of our live shows," Clark states, growing steadily more animated. He was dead tired when I arrived, but now he's ready for a beer at the Phone Booth, which is just around the corner from here. "There is a very specific sound that James and I are interested in having. It's a tape sound. If someone were to mike us properly and capture the space between the sounds, then that would conflict with what we are going for. We want the tape heavily submerged in the sound where there are confusing things happening."

"We don't want it recorded pristinely," Ferraro echoes, adding an alchemical flavor to his explanation. "The tape is a good way of obscuring that and making something that sounds like a landscape in your mind. That's pretty much why we've decided to record on tape."