I recently did an interview with Steve Quenell for Monolith magazine. Quenell is an excellent neo-psychedelic artist based in Seattle. He's done album artwork for The Black Angels, The Warlocks and Black Mountain, amongst others. You can read the interview here 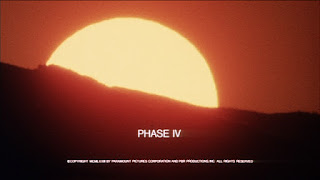 The talk on poetry and swarms (see previous post ) concluded with a reference to the film Phase IV (1974) directed by Saul Bass. Bass was best known as a pioneering designer of title sequences (Hitchcock, Preminger) and Phase IV is the only film he directed. It was written by Mayo Simon, who would later go on to pen the screenplay for Richard T. Hafflin’s Futureworld (1976).

Focusing on a threatening accumulation of ants in the desert, the film ostensibly works as part of the sub-genre of loosely ‘ecological’ horror films that proliferated in the 1970s. Night of the Lepus (1972), Kingdom of the Spiders (1977), Empire of the Ants (1977) and The Swarm (1978) amongst many others, posited a revolt of ‘nature’ against the human world and its attendant forms of ecological exploitation: urban growth, pollution, environmentally damaging experimentation and destructive profiteering. In essence, these films took the imagery of the Cold War radiation fantasy Them! (1954) and combined it with a different criteria of otherness and a less overt (but nonetheless resonant) internal agenda. Paranoia remained in the 1970s as cinema’s primary fear reflex but having adjusted its image of monstrosity from aliens and communists to animals and insects, this fear no longer emanated from the borderlands  Instead it was located in nature itself, that which is immanent, proximate and ambivalent. 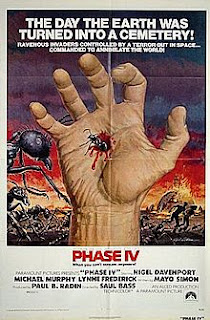 The production of Phase IV no doubt benefited from this contemporary fixation but ideologically, the film was very different from the work of Irwin Allen and Bert I. Gordon. This difference was a source of its failure at the time of its initial release but has equally has become the source of its current cult appeal. The film’s promotional poster suggests that it works as a fairly conventional insect-related horror movie. All the tropes are there: images of human peril, malevolent ants, and a hyperbolic, funereal tag line, “The day the earth was turned into a cemetery!”[1]

However, this depiction only relates to one scene in the film. It also does nothing to connote its scientific, almost anthropological tone. (One wonders what the image would have been like if Bass, himself a graphic designer, had of been in charge of the publicity campaign.) In contrast to the binary hysterics of Empire of the Ants, Phase IV owes much more to the clinical, institutional detachment of early Cronenberg, particularly Stereo (1969) and Crimes of the Future (1970). As with the extensive body horror Cronenberg would go onto perpetuate, these works propose something of a posthuman agenda whereby the human body is rendered obsolete in the face of a research trajectory that attempts to articulate and manifest new forms of consciousness: telepathic, physical and sexual. Similarly, Phase IV uses the idea of the ants as a ‘hive-mind’ to depict a collective, constellate intelligence. This entity is not without offensive potential that offers a violent threat to the human form, but as the film concludes, the title implication becomes clear. Bass and Simon do not end with flame-throwers and a renewed attempt to prevent further invasion, as in both Them! and The Swarm but hint that the swarm structure of the ants represents a further ‘phase’ of organic life in which homo sapiens can participate.

At least, this was Bass and Simon’s initial intention. When Phase IV was first released, its preview length of 93 minutes was cut down to 84. Amongst the material excised by the distributor was a 4 minute montage sequence that closed the film.

Coming after the line, “they wanted us” this conclusion suggests that the emergence of the ant swarm signals the start of an evolutionary tribulation for the 2 surviving characters. Bass’s imagery combines the dystopian with the tyrannical as well as symbols of transformation, transcendence and psychedelic expansion. In the cut version, this conclusion is significantly more explicatory. “They wanted us”, we are told, to become part of “their world”. Here, the visionary range of the original ending is lost in favour of a conclusion that veers more towards a negative re-telling of the 1950s monster scenario.

It appears as if the “transformation” hinted at is a surrender of the human form to the monstrosity of the ants. By contrast, in the original version, whilst the transformation depicted is not without trauma, that which is projected is far from a terminal phase.  Bass and Simon seem to point towards a state of posthuman hybridity, more redolent of the transitions seen in J.G. Ballard than a capitulation to the eco-apocalypse scenarios posited in the likes of George McCowans’s Frogs (1972):

I know now that I shall return to the . As the example of that brave apostate priest who gave the cross to me illustrates, there is an immense reward to be   found in that frozen forest. There in the everglades, the transfiguration of all living and inanimate forms occurs before our eyes, the gift of immortality a direct consequence of the surrender by each of us of our own physical and temporal identity. However apostate we may be in this world, there perforce we become apostles of the prismatic sun.[2]

The lost ending of Phase IV was recently restored for a special screening at the Alamo Drafthouse on December 1, 2012. This was a mere 20 days before the projected end of the world. That this ending should emerge at this time speaks volumes about its original intention. If Phase IV carries an apocalyptic sensibility, it is an apocalypse in the sense of a process of ‘revealing’; something to be sought out rather than defended against. 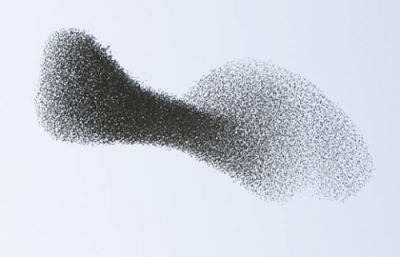 On Tuesday 7th May, I'll be speaking at the 20th Century & Contemporary Literature Graduate Seminar.

With reference to work by John Kinsella and Nick Flynn, this paper will discuss the image and concept of 'the swarm'. The word describes insect, animal and human processes of active accumulation, signifying by extension a state of diffuse uniformity: identity as constellation. Although it carries an extensive etymology, 'swarm' has acquired a persistent currency in late 20th and early 21st century critical, cultural and literary theory. From ecocriticism to web politics; from the Occupy movement to slime dynamics, 'swarm' has been employed as a marker of a de-centralised, non-hierarchical and yet intentional entity of thought, movement and particularly activism. With this discursive context in mind, this paper will look at some recent poetic appearances of the term. Taking a speculative viewpoint, the aim will be to assess the efficacy of the word 'swarm' as a tool of poetic activism.