Follow this link for information on Framework 52: Things Fall Apart, The Peter Whitehead Issue,a massive, 2 volume set of academic essays and previously unpublished writings from the archive of Peter Whitehead.

I've edited it along with Paul Cronin and Drake Stutesman.
Posted by James Riley at 08:34 No comments: 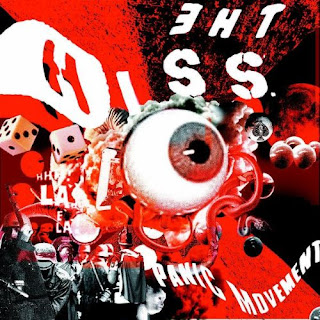 It's connected to this talk:

The Bad Trip: Neo-Psychedelic Art and the 'End of the Sixties'.

In 2003 Loog Records released Panic Movement by the American rock band,
The Hiss. The title was a reference to Mouvement panique, a performance
collective active between 1962-1973 that involved the artists Fernando
Arrabal, Alexandro Jodorowsky and Roland Topor. Mouvement panique devised
confrontational 'happenings' designed to affront the petit bourgeoisie
sensibilities of Surrealist art. The group performed throughout the sixties
before developing their ideas into other media, notably Jodorowsky's films
El Topo (1970) and The Holy Mountain (1973). Whilst the conventional,
college rock of The Hiss failed to conjure the creative chaos of panique,
the album's cover art with its swirling collage of snakes, bikers, skulls
and military insignia offered an accurate visual evocation of the group's
performances.
Examination of the promotional artwork produced by associated
post-millennial 'Neo-Psychedelic' bands reveals the use of comparable
themes and imagery. Steve Quenell's cover for Heavy Deavy Skull Lover
(2007) by The Warlocks and Rob Fitzpatrick's 'Space Skull' posters made for
The Black Angels create a visual language of death, transformation and
(oc)cult activity. 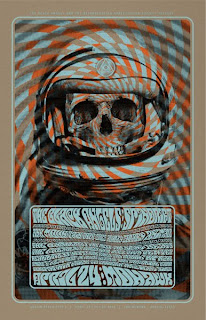 Complimenting the musical pastiche executed by the bands
themselves, these motifs accumulate reference points associated with the
'End of the Sixties', the micro-narrative of apocalypse and violence that
permeates the representation and reception of certain late-sixties cultural
events and artifacts, such as Jodorowsky's nihilistic 'acid westerns' and
the enduring connection between 'Gimme Shelter' and Altamont, 'Helter
Skelter' and the Manson murders.
Through a close analysis of the distinctive visuals that
characterise 'Neo-Psychedelia' as a sub-genre of contemporary rock 'n'
roll, this paper seeks to map and interrogate the 21st century
appropriation of iconic subcultural signifiers. If we are to see the
sixties as a deeply resonant 'long decade', this paper considers some of
the strategies motivating, and the implications emerging from, its
persistent extension.
Posted by James Riley at 03:56 No comments: