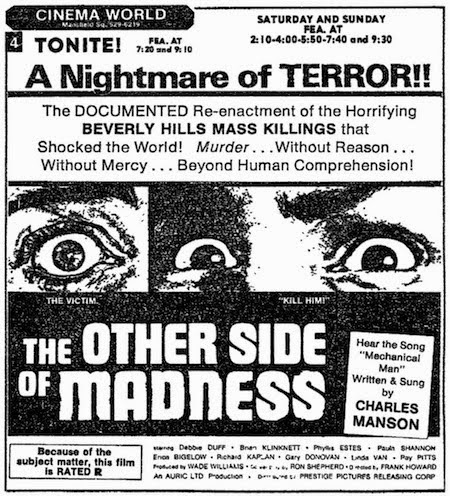 It's been a good couple of weeks for events and occurrences linked to the ongoing Bad Trip project. First, last Saturday saw the English Heretic / Exploring the Extraordinary event Weekend Otherworld. As noted in a previous post, I spoke about Performance and the manner in which magickal language has been used as a means of describing its cult status. This fits into the project because not only is Performance a classic cul-de-sac movie but its been co-opted and examined by a wide range of writers who have read the film as a terminal index for the decade: Zachery Lazar, Chris Petit, Alan Moore, Iain Sinclair. The last two are particularly interesting because Performance works - alongside Mike Hodges' Get Carter (1971) as the primary cosm for Moore's League of Extraordinary Gentlemen: 1969. Mid-way through, Sinclair 'materializes' as Norton, his space-bound time traveller from Slow Chocolate Autopsy (1997). Speaking in perfect Sinclair-argot, Norton speaks of Performance as "occult celluloid", dangerous material that's "liable to flare up". Certainly, the idea of Performance as being materially connected to 'dangerous' forces works as a key signpost for the way in which I see certain cultural artefacts from the late-1960s as having accumulated a persistent resonance. My point was that this aura relates to the manner in which such texts intersect on the basis of a shared contextual significance rather than a specifically thematic consistency. Questions after the talk brought up Frank Howard's The Other Side of Madness (1970). On reflection, I think the negative spider-web seen during that film's credit sequence offers a good way of mapping this material: a network of links that doesn't support a 'centre', but a constant process of proliferation. I was pleased to find that this take intersected in various ways with some of the other papers from the event, particularly Evie Salmon's brilliant take on 'the geographic turn' in art and film, Hannah Gilbert's thoughts on horror and anthropology and Andy Sharp's idea of the 'poetic conspiracy'.

On Tuesday night there was a very interesting discussion of the project on George's Bickers' excellent radio show Tripping in Babylon. The show is a brilliant discussion of psychedelia and narco-culture that features sharp eyed cultural analysis from George interspersed with some great music. George is doing a fabulous job in curating his shows and they're all well worth a listen. During Tuesday's broadcast he very kindly referred to previous lectures and public events I've done as part of the Bad Trip project. It was good to know that it has been of use to his work. Listening to TiB is like being guided through a fascinating, ongoing essay. The whole format seems like a really interesting way to develop and disseminate research. Check it out!