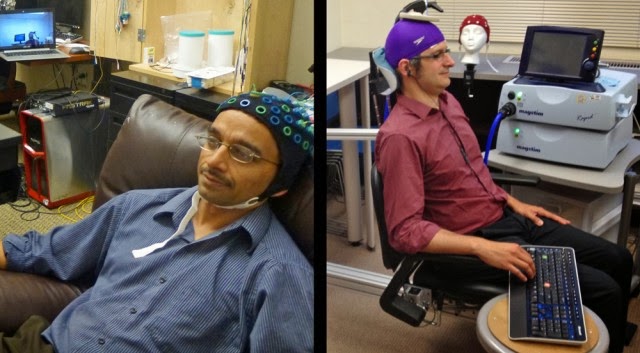 The work of a research team at the has recently hit the news after they appeared to succeed in achieving telepathic communication from one human subject to another. Team leaders Rajesh Rao and Andrea Stocco have developed an internet channel that permits one researcher to control the hand of another through the use of ‘transcranial magnetic stimulation’ (TMS). Ostensibly, this method of remote control is no different to the cyborgian networks used by Stelarc in his ‘third hand’ and ‘involuntary body’ performances of the mid to late 1980s. However, in the case of Rao and Stocco’s work the issue is not just one of a body opened up to external manipulation, but of a mind opened up to the influence and suggestion of another.


The experiment consists of two researchers watching the same video game, one that requires the player to fire at a series of targets. The researchers occupy opposing sides of a simple communication circuit consisting of sender, channel and receiver. The ‘sender’ watches the game whilst connected to a computer via an electroencephalographic interface. When the sender thinks about firing, their EEG registers the signal and transmits it to a second computer. Here, a link is established to the ‘receiver’ via a TMS machine. This device fires an electromagnetic impulse into their motor cortex that mimics the neuronic impulses governing hand movement. A flicker of thought at one end of the circuit is thus immediately rendered as a twitch of movement at the other end. The sender thinks, the receiver fires.
Unsurprisingly, this story generated some ominous murmurs amongst the press, and perhaps rightly so. Sebastian Anthony, writing for Extreme Tech suggested this “slightly terrifying human-to-human interface” raises a number of ethical issues regarding autonomy, control and the possibility of subversion. As ever, William Gibson’s adage that the street will find its own use for things casts a dark shadow over news of technological progress. Certainly the vaguely militaristic implications of Rao and Stocco’s ‘game’ are hard to avoid. But the particular anxiety generated by this development seems to specifically circulate around the concept of telepathy. Thought transference and implantation appears to symbolise a transgression that is far more intimate than ‘mere’ physical control. Not only does the process hint at psychological passivity but it also points to a mode of communication that uncannily exceeds visible, tangible and material media: an almost occult practice. 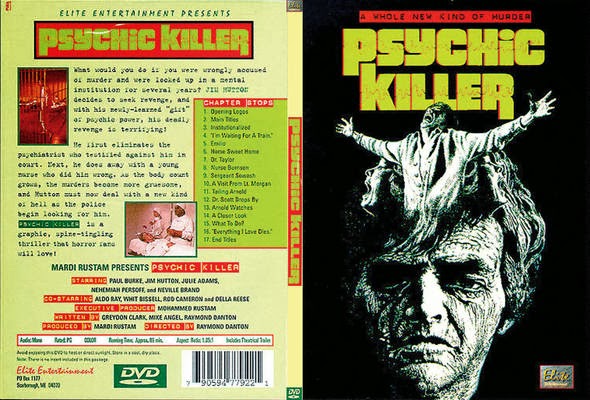 It’s probably for this reason that such implications are presented as reassuringly futurological. In a brief act of foreclosure, Anthony reports that the research could yield “implants that allow for full telepathy”; the unease is registered but its source is posited as a still unrealized development.  It’s easy to understand the nature of the concern here. All kinds of films ranging from The Psychic Killer (1975) to Scanners (1981) have presented telepathy as a force of malevolent destruction. But just how alien is the phenomenon? Some would argue that telepathy, in theory – and to a certain degree in practice – is not “coming soon”; it’s already here and it’s been with us for a long time.
The word ‘telepathy’ was first coined in 1882 by Frederic Meyers, one of the founding members of the Society for Psychical Research. Working as a combination of tele (‘distant’) and patheia (loosely translated as ‘feeling’) it was used to describe one of the Society’s main areas of investigation, the apparent phenomenon of thought transmission that occurs in the absence of a material or sensory channel.
The SPR emerged as something of a counterpoint to the late 19th century interest in spiritualism and theosophy. In essence, it was an organization of rational enquiry that sought to observe various parapsychological phenomena in order to assess their veracity. Along the way, these investigations would seek to debunk where necessary the work of ‘sham’ psychics. Within this field of study, telepathy was understood as a possible form of communication between individuals as well as the ability that would have to be proved in order to confirm mediumship – contact with the dead – as a physical reality.
A classic case-study of the latter is A.J. Howard Hulme and Frederic H. Wood’s Ancient Egypt Speaks (1937), an account of an alleged case of ‘trance possession’. Hulme and Wood describe how ‘Rosemary’, a medium with no knowledge of ancient languages, apparently became the vessel for the voice of ‘Nona, Babylonian wife of Amenhotep III’ during several weeks in 1936. The historical reference points are of course vastly different to the experiment but Hulme and Wood posit a similar network of exchange: instantaneous communication between a sender and a receiver that carries with it the same unease as regards individual submission. As with the involuntary movements prompted by the TMS hook-up, Rosemary was said to have been ventriloquised, having “relinquished conscious control” to this “external spirit” of “the eternal sphere”.
In 1902 the psychologist C.G. Jung wrote about a similar case and presented it as an instance of cryptomnesia, the resurgence of repressed memories as new experiences, due to the susceptibility of the entranced ‘medium’ to leading questions. Sigmund Freud, who dealt with telepathy in four essays written between 1921 and 1933, expressed a similar scepticism. He argued the majority of cases could be explained as instances of unconscious wish fulfilment. However, in ‘Dreams and Telepathy’ (1922) he admits that in theory, the receptivity of sleep and the dream state could create “favourable conditions” for the transmission of a mental act from one mind to another. In ‘Dreams and Occultism’ (1933) he adds that such hypnagogic receptivity, if possible at all, is likely to occur between individuals with a “strong emotional interest”.
Judging from this line of enquiry (and there are many involving telepathy) the initial articulation of the phenomenon leads to the hypothesis of the telepath: the individual who possesses the ability as a remarkable talent. In a sense, this designation has the same function as the speculative projection of telepathy. Both seek to present the process as that which is different to and therefore distant from the accepted norm.
By contrast, another line of analysis seeks to emphasise the proximity of telepathy to normative modes of communication. In the mid to late 19th century, the prefix tele was used to name a succession of technological innovations including the telegram, the telegraph and the telephone. For cultural historians like Pamela Thurschwell, these teletechnologies supported spiritualist claims regarding the “inexplicable trafficking between minds and bodies” because they established an “imaginative correspondence for delineating psychic and physical transmissions”.
J. Hillis Miller takes this further in his book, The Medium is the Maker (2009) where he argues that communications technology of the 20th century negates the necessity for “mediums in the occultist sense”. Miller explains that “the word ‘medium’ once named a man or woman who was the apparatus for downloading voices […] from the spirit world” via telepathy. In contrast ‘medium’ now names “the whole bio-techno-prosthetic apparatus […] of telecommunications”, the “technical means of reproduction and transmission of what is at a distance”. The 20th and 21st century dominance of telecommunications media thus marginalizes the concept of telepathic and clairvoyant phenomena. Technologies such as “telephone, radio, tape recorders, cellphones, TV [and] the internet” make “instantaneous” contact at a distance an “everyday” occurrence.
If anything, this is what the research makes clear. The stark extremity of the interface it uses masks the fact that the experiment is an amplified rather than aberrant image of what currently passes for contemporary interaction. We’re all connected by the cortex to the open source nervous system that is the internet and are constantly twitching into action at the vibrating command of our mobiles, tablets and devices. The queasy future shock generated by transcranial magnetic stimulation relates not to the glimpse it offers of developments to come but to the way it reminds us that telepathy is already hardwired into our conception of communication.
This article was originally published in Monolith magazine. My thanks to Lore Oxford for letting me post it here.