I have an article in the new issue of Performance Research, 'On Turbulence'. It's based on the swarm talk I presented last year. I've put my article outline below and you can find more information about the issue here. 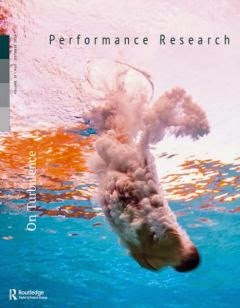 Auguries of Discord: Protest, Activism and the Swarm.

In November 2010 played host to a series of large-scale student demonstrations against the proposed (and now implemented) increase in tuition fees. At the same time, the south coast of was subject to a particularly high-rate of murmuration: the wave-like accumulation of starlings in the vicinity of mass roosting sites. Brought into synchronicity by broadcast media, these two events – ‘natural’ and ‘cultural’ – point to the ambiguity and productivity of swarm behaviour.

As a concept, the notion of the swarm posits the seemingly paradoxical state of a singular collective, a constellate identity that exists in a position of homogenous heterogeneity. A swarm is not just a large group of creatures but a mass of individuals who are understood as a collective or a colony; an entity that works within and is constituted by a matrix of feedback and co-ordination. Generally applied to the activity of bees, ‘swarm’ has increasingly come to signify a trans-species form of intelligence and performance. Rather than denoting an insectoid equivalent to ‘flock’ or ‘herd’, the word has assumed significance as a noun and verb that describes “a group of individuals who respond to one another and to their environment in ways that give them the power, as a group, to cope with uncertainty, complexity and change”.[i] This is frequently coupled with a bipolar application that sees the word being used equally to describe an intended subject of control as well as the means of control. The swarm is indicative of both ungovernable, plural excess and invisible, decentralized organization.[ii]

In this article my aim is to investigate the synchronic and homologous connection between non-human and human swarming suggested by the events of November 2010. In offering ‘swarm’ as a concept to analyse protest activity, my intention is not to draw on the metaphorical resonance of the word and thereby engage in associative substitution. Instead, I will argue for the need to understand ‘swarm’ and ‘protest’ as concepts that exist within a metonymic relationship, one that is based on a particular point of connection between the two.

Specifically, if one sees the theatre of protest as a physical manifestation of “protestation”; a complaint, “the formal (written) declaration against a proposal”, then parallels can be established with the collective event that is performed by the swarm. Etymologically, ‘swarm’ relates to the Sanskrit word for “sounds, resounds”. Swarm thus describes the production of noise, hence its common association with the buzz of bees. Murmuration, understood as a form of swarm behaviour maintains this sonic emphasis. The term originally described the spreading of rumour, the continual utterance of low cries and the act of moving one's lips without speaking. Its application to starling movement follows the metaphorical revival of the term by W.H. Auden and Mervyn Peake. [iii]  In each case, then, the swarm is presented as a signifying, communicative entity. Just as the protest wishes to be heard, it is necessary to listen to what the swarm has to say. Drawing upon John Kinsella's notion of poetic activism, I will argue that the development of this connection can assist in defending the disputed efficacy of protest activity.[iv] Similarly, the synchronicity can also be used to foreground and critique the frameworks that obfuscate and neutralise the performative potency of group activism. My overall intention will be to offer the swarm as a primary tool for the navigation and propagation of contemporary turbulence.


[i] Peter Miller, Smart Swarm (: Collins, 2010), pp. xvi-xvii.
[ii] For the science fictional flipside of Miller’s systems analysis, see Arthur Herzog, The Swarm (New York: Holt, 1974).
[iii]  Each of these definitions and word histories are taken from the current edition of the English Dictionary.
[iv] See John Kinsella, ‘Standing Up to Aggressors’, in Activist Poetics: Anarchy in the Avon Valley ed. by Niall Lucy (: Liverpool University Press), pp.16-23, p.16.
Posted by James Riley at 04:55 No comments:

I was recently interviewed about the psychological and creative process of reading for CAM magazine. You can read the issue here. Many thanks to Lucy Jolin for getting in touch.
Posted by James Riley at 04:39 No comments: