See the side bar for information on and a link to the website of Adam Matthew Digital. I recently put together a collection for their digital resource, Rock n Roll, Counterculture, Peace and Protest. This material, 'Selections from the Nohzone Archive: 1965-1969' presents rare production documents detailing the material composition of Whitehead's films, including Wholly Communion, Benefit of the Doubt, Tonite Let's All Make Love in London, Charlie is my Darling and The Fall. There is also a sequence of unseen photographs and an essay that introduces and details the collection. It is a useful research tool that supplements the material compiled for Framework 52.
Posted by James Riley at 06:01 No comments:

Information below regarding a film screening and lecture I did this summer at Nottingham Contemporary. Click on the hyperlinks for clips and more information.

As part of their Aquatopia exhibition, Nottingham Contemporary will be running a parallel film season: Aquaphobia. 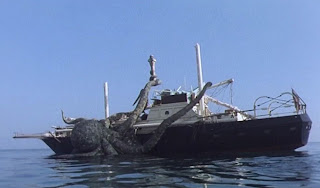 Aquatic cinema is an ocean as vast as the . Within this expanse, the language of horror works as a primary tool of navigation: Earth’s liquid territories are an inner space to be feared. From sea monsters to swamp things, from cephalopods to giant crocodilians, cinema teaches us that the surface of the water covers an entire world of danger and hostility. Although we humans might have come from the sea, it’s never safe to go back in…


I've been asked to program two slots as part of this four week season. I've suggested two events: a screening of Warlords of Atlantis as well as double bill of Creature from the Black Lagoon and It Came From Beneath the Sea. The Warlords event will involve a talk on film, occulture and Atlantean myth and I'll also be providing a set of film notes to accompany each of the screenings. In addition, I've also put together a You Tube channel to work as a supplement to the talk and to the Aquaphobia season.

Click on the title links below for clips and more information relating to times, venues and booking details.

Taking its cue from Vincent Gaddis’ classic work of Forteana, Invisible Horizons: True Mysteries of the Sea (1965), this illustrated talk looks at American aquatic horror and science fiction films of the 50s, 60s and 70s. It will consider the influence of esoteric and ‘occultural’ thinking on the development of the sub-genre.

At the start of Invisible Horizons, Gaddis describes himself as a writer "who specializes in exploring the borderlands where fact emerges from myth and legend". This talk is interested in the inverse territory: it seeks to explore the transformative borderland where fact becomes myth and legend. Speaking about the work of Ken Hollings, Erik Davis described his area of interest as "the Zone", the "fluid and unmapped" area of post-1945 history in which technology, popular culture and fringe science blurred in an associational symbolic network. The myth of Atlantis, particularly in its post-60s incarnation, formed a similar 'Zone' or, more specifically, a Triangle: a nodal point at which film, ufology and speculative archaeology converged to create a strange cultural mirage.

Judging by films like 20,000 Leagues Under the Sea (1954), City Under the Sea (1965) and Warlords of Atlantis (1978),  seems to have dealt with more than ‘just’ the military industrial complex during this period. In contrast to the more familiar narratives of aliens, space and body snatchers, these films deal with older ideas: the amniotic past, the murk of the unconscious and archetypal history. 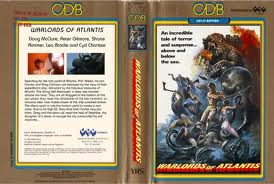 Originally titled Seven Cities to Atlantis, Warlords was the fourth collaboration between director Kevin Connor and star Doug McClure. This psychotronic Scorsese and De Niro had previously made The Land That Time Forgot (1975), At the Earth’s Core (1976) and The People that Time Forgot (1977), three films based on the writings of Edgar Rice Burroughs. Warlords carries the spirit of these films but not the source material. It was written by Brian Hayles who is best known for his work on Dr. Who, particularly the 1967 serial The Ice Warriors.

In 'The Thinking Behind Atlantis', his preface to Paul Victor's novelization of the film, Hayles describes how the myth of the lost city has been used to posit the notion that humankind developed from a singular and tremendously advanced civilization. He explains how this trope has been extensively discussed and appropriated by writers promoting a dizzying array of paradigms. From the trance predictions of Edgar Cayce to the cosmology of Carl Sagan, from the 'ancient spaceman' hypothesis of Erich von Daniken to the ufology of Charles Berlitz, the essential invisibility and obscurity of Atlantis has allowed the myth to persist via a constant process of modification.

Although Warlords clearly does its job as a creature feature and works, in the words of Hayles, 'simply as a science fiction adventure', it's also not afraid to draw upon these pseudo-scientific ideas in its presentation of the extra-terrestrial Atlanteans. In contrast to the positioning of the city in the ancient past in George Pal's Atlantis: The Lost Continent (1961), Hayles offers the 'lost' city as a submerged but parallel force that secretly controls mankind's evolution. It's this mix of high-adventure and fringe-thinking that makes Warlords the unacknowledged gem of the Connor / McClure quartet.

“Out of the murk and mystery of a hundred million years ago, up from the depths of unknown waters comes a creature to confound science!” 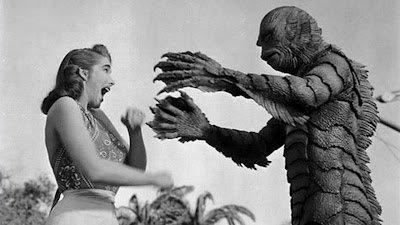 Creature from the Black Lagoon is one of the all-time great Universal creature-features. A scientific expedition to the Amazon discovers evidence of a highly evolved amphibious humanoid whose existence is tied to a legendary tributary on the river. Originally filmed in 3-D, Creature was much imitated following its release (The Monster of Piedras Blancas [1959], Attack of the Giant Leeches [1959]) and although it features some stereotypical trappings of the period, the film is distinguished by its use of excellent underwater photography courtesy of Bruce Mozert. In particular, the sequences in which the creature stalks Julia Adams as she swims rival Jaws in their suggestion of a subaquatic sense of menace.

The real star of the show, however, is the creature itself. The iconic design was developed and sculpted by Milicent Patrick, Bud Westmore, Jack Kavan and Chris Mueller. As a figure of horror, The Gil-Man is still effective 58 years later. Both recognizable and utterly alien, it perfectly encapsulates the mixture of fascination and fear that is associated with the concept ‘underwater’.

Creature spawned two sequels, Revenge of the Creature (1955) and The Creature Walks Among Us (1956). Although less effective, arguably due to the loss of the 'Black Lagoon' location itself, these films plot an interesting line of continuation in which the creature is briefly assimilated into the terran world. The final shot of Among Us showing the creature returning to water brings things full circle: the pull of the aquatic domain is inexorable. Dangerous but also life giving, a space of origin and of final refuge, water is the substance that connects the human to earlier and hitherto unknown stages of evolution.

It Came From Beneath the Sea (Robert Gordon, 1955) 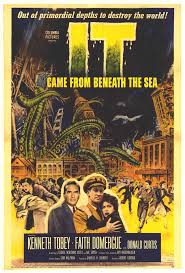 Ray Harryhausen (1920-2013) is best known for his stop-motion animation work on Jason and the Argonauts (1963) and Clash of the Titans (1981). Prior to these spectacular takes on ancient myths, Harryhausen worked with producer Charles H. Schneer on a series of ground-breaking science-fiction and monster movies designed specifically as special-effects showcases. It Came from Beneath the Sea was the first of these collaborations and features a giant octopus attacking .

At least it was meant to be an octopus. Look carefully: you’ll only ever see 6 arms on screen because the budget didn't stretch to the full 8. Other budget restraints resulted in an interesting level of realism in the film. Director Robert Gordon shot hand-held scenes in submarines at the San Francisco Naval Shipyard and coaxed a number of navy officers into serving as extras.

Prior to working with Schneer, Harryhausen made The Beast from 20,000 Fathoms (1953) with director Eugene Lourie. Based on 'The Fog Horn' (1951), a short-story by Ray Bradbury, Beast concerns a pre-historic Rhedosaurus that is released from hibernation due to a nuclear explosion. Its subsequent rampage around New York set the standard for giant monster movies, a formula developed and perfected by the Godzilla series. What all these films have in common is the idea of a revived monster, something from the deep past that is brought into the 'now' due to the crisis of the present: radiation, atomic energy, experimental weapons testing. The appearance of these 'Old Ones' is a manifestation of humankind's self-destruction and in It Came from Beneath the Sea, the 'octopus' seems to be more of a terrible conjuration than an atomic mutation. The climactic scene in which it attacks the  is positively Lovecraftian in its visualization of a tentacled apocalypse.