The following text was based on my contribution to Film,Geomancy and the Alchemical Landscape, a film screening and symposium featuring Ben Wheatley’s A Field in England (2013). The event was held at the on 28th November. Many thanks to Evie Salmon  for organizing the event and inviting me to speak.

For a film so concerned with space, it’s very hard to place Ben Wheatley’s A Field in England (2013). It’s geographically indistinct and historically ambiguous. The attempt to define a critical position is similarly fraught, mainly because the film offers a very strange combination of the familiar and the unfamiliar. Horizontally in terms of generic specificity it’s hard to tell where the film might sit. Is it a historical drama? A horror movie? A comedy? Director Wheatley and writer Amy Jump certainly work with each of these registers to construct the film but it carries no dominant generic markers. However, if we look vertically, in terms of a historical and cinematic continuity, A Field in England does seem to fit into a discernible lineage of ‘trip’ cinema. More specifically it seems part of a psychotropic mode that includes films about altered states and / or attempt to induce to altered audience perception. This group includes film like Corman’s The Trip (1967), Kubrick’s 2001 (1968), Jodorowsky’s El Topo (1970) and Bass’ Phase IV (1974). We could also insert the film into the retroactive sub-genre of ‘folk-horror’ alongside the likes of Blood on Satan’s Claw (1970) Witchfinder General (1968) and The Wicker But again, the connection to these genres, certainly the latter is one of mood or ambiance rather than direct reference, permutation or citation.

In the light of this difficulty, we could use the intersection of these axes as a mode of categorization and offer the film as an example of ‘uncanny cinema’, insofar as it stands as a film that is both familiar and unfamiliar at the same time. However, unless we’re prepared to use ‘uncanny’ as a generic signifier rather than an aesthetic marker (which is what it is), we need to be a bit more specific.

Indications as regards the film’s own field, can I think be found in its publicity and promotional material. Here’s the poster  - designed by artists Luke Insect and Kenn Goodall, who work under the moniker The Twins of Evil. As their name (taken from a 1971 Hammer Horror film) suggests, their style is influenced by the hysterical morbidity and residual psychedelia of the late 1960s and early 1970s genre cinema. Insect’s work in particular – largely on account of his involvement in the rave scene – has been called neo-psychedelic. It maintains the day-glo intensity of Nigel Waymouth but is characterized by a certain level of negativity that is at odds with the transcendental optimism of Hapshash and the Coloured Coat

The poster for Field exemplifies this approach. It uses the same silkscreen techniques that we might expect of Waymouth and incorporates a comparable luminosity into its brooding image of the sun / moon. However as this is a black hole or dark eclipse we're not provided with the the orgasmic harmony and elevation that we might associate with the posters for UFO or Middle Earth. It's quite obviously an appropriate symbolic extraction that can be used to encapsulate the bad trip that is the film.

Although these features link Field to neo-psychedelia, another way of viewing the film is suggested by the alternative trailer designed by the artist Julian House.  Here we have a similarly high contrast palette indicative of stereotypical psychedelic imagery. The trailer is shot through with the kind of mescalinized intensity described by Aldous Huxley in Heaven and Hell (1956). However, House adds a number of additional details. Unlike the smooth, HD black and white that embellishes the film, what’s emphasised in the trailer is the grain of decaying film-stock. House emphasises the degraded materiality of celluloid which seems to enhance the paranormality of the of the events in the filed as depicted in the film. The impression is created of spectral emanations momentarily captured on film with distorting results.


This combination of analogue technology, countryside nostalgia and an underlying sense of occult unease is a hallmark of Ghost Box, House’s record label. Whilst Ghost Box owes much to the matter and colour scheme of psychedelia it has been placed under a very different aegis, that of hauntology.

Hauntology is, (in)famously, a term that appears in Jacques Derrida’s Spectres of Marx (1993) as a cultural extension of his work on the trace. As has been extensively glossed elsewhere the word is a play on ‘ontology’ that exploits its homophonic overlap in French with hanter (haunt). Derrida uses it to critique ‘metaphysical’ notions that associate ‘being’ to self-presence. ‘Being’, insofar as it can be defined – when not erased or cancelled as an unthinkable aporia – is a state of spectrality: there is no ‘archive’ or starting point but a proliferation of echoes and shades. As Brian Baker has described over at (SF) 365, in around 2006 writers like Simon Reynolds used the idea to describe the sensibility of Ghost Box and similar artists who collectively appeared to express a “nostalgia for the future”: a nostalgia for the future as conceived by post-war community projects and the optimism of public information films. Such a future is seen as subject to nostalgia because it represents a forward trajectory posited in the post-1945 period that was ultimately “foreclosed by late capitalism”. 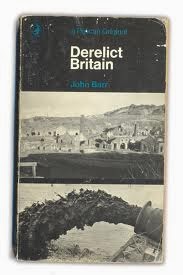 Although this use of the term is not without problems, I’m inclined to adjectivally apply it to A Field in and offer the film as an example of hauntological cinema rather than neo-psychedelic cinema. This is because the latter term threatens to obfuscate the specificity of the film’s events. Despite the obvious resonance of the mushrooms and the temptation to compare the film with Roger Corman’s The Trip – an acknowledged influence on Wheatley – to term it neo-psychedelic veers towards pastiche. That’s to say, it’s easy but unproductive to shorthand the film as a recapitulation of classic drug movies that adds nothing to the form. Similarly, a persistent strain of English psychedelia (early Pink Floyd, Tolkien revivalism, John Michell) valorised the rural as a space of alterity away from the kind of brutalist projects so lamented by John Barr in Derelict Britain (1969).

It’s precisely the decline and virtual disappearance of these projects: new towns, garden cities, comprehensives and polytechnics that’s investigated and valorised in the hauntology of Ghost Box et al. Coupled with a fascination with the mediating productivity of redundant recording technology the idea is that such spaces, equipment and architecture exude a powerful psychogeographic resonance.

I think it’s very much this kind of territory that Wheatley’s film fits into. Despite its atavism, it offers a perspective on the occultural landscape that’s different to that which we might expect to find in broadly comparable 1960s texts. In the film the filed itself is narratologically foregrounded. It is not, as in Witchfinder General, a backdrop across which acts of violence take place or a screen which, as in the cityscapes of The Trip is seen differently under synthetic stimulation. Instead the field is presented as a deeply affective space. It is an instrument and a cultivated technology of mediation that exerts a powerful influence over its receivers; an influence which, if we are to go along with the trilogy reading of Wheatley’s work, is still active in Kill List (2011) and Sightseers (2012).


In this sense, I’d place A Field in not with Blood on Satan’s Claw but with more directly hauntological texts such as the work of Nigel Kneale, particularly Quatermass and the Pit (1967) and The Stone Tape (1972). In each case the results are the same, it’s just the technology that’s different.  In offering this categorization, I’m using ‘hauntological; as a critical term because in this expanded sense (and such an expansion needs to be kept in mind in order that its specificity for Derrida can be maintained) as is suggested by Reynolds, the flickering status of the spectre represents a riposte to the zombification implicit in the ‘retro’ work. By extension this operates against the underlying essentialism and lamentation active in postmodernism. It points not to the return of that which has been seen before and that which says it again, but to that which seeks to ‘make it new’ via the return of something we never knew existed.
Posted by James Riley at 06:37